What can I say to the masses about Thelonious Monkey?  What a crazy ass show at the Baked Potato, Lankershim.  Chris “Drummer of the Century” Wabich, the beautiful Jenny Ing on keys, vocals, and sax (modern day Karen Carpenter, Minnie Ripperton) playing the 2016-not 2015 versions of future jazz.  Alternative rock jazz and blues; my potato had to wait. Paid $15.00 for the thing, to sit while I was amazed of the sound I was hearing.  Jenny, Chris and the band were so terrific and off the Canada tour, when I last heard them.  The[lonious] Monkey music is so obscure, clear founded.  Yoko and Lennon I know for a fact would be sitting in my chair, at [the] edge of their seat.  Terrific is an understatement.

On February 11th The Community Services Center is thrilled to be hosting a kick off event: An Evening Of Jazz to celebrate our 30 year anniversary. This benefit concert includes a three course seated diner at The American Club in Taipei and will be featuring Thelonious Monkey Featuring Chris Wabich. 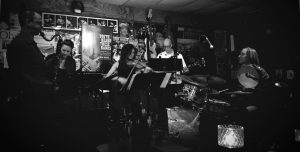 Thelonious Monkey is a Los Angeles based jazz band that it taking the city by storm. Focused around a set of strong original compositions by Chris Wabich and Jennifer Wabich, this Jazz Quintet quite literally rocks – fusing traditional jazz, middle eastern grooves that their drummer and leader is known for, and rock and roll.

The ensemble consists of drum set, percussion, steel drum, electric bass, keyboards, saxophones, vocals, violin and cello, which seems like too many elements for a quintet until you meet the musicians involved. More recently, Chris has been arranging and producing projects including Billboard charting hits for Margo Rey/John Oates (of Hall and Oates), Ty Taylor from Vintage Trouble, and the Beatles show, “Both”. Chris is currently working on a solo album, his 30th release as a leader.