Cool Meals for the Summer Heat
by Emily Quah

Throughout the different chapters of my life, I was fortunate enough to have lived in various countries scattered over three continents. Having spent my childhood in Malaysia, situated right next to the equator, I thought I could handle any tropical heat.  But nothing prepared me for the soaring temperatures coupled with off-the-scale humidity that is summer in Taipei.

The assault began as soon as we stepped off the plane last August.  Never before had I felt beads of sweat persistently forming on every pore of my body without having to move a single muscle.  I was constantly drenched, either from the heat or from the umpteenth showers I took a day.  We were told that it was an unusual year, but the heat stayed with us until winter suddenly took over in late November and Mother Nature seemingly decided to skip autumn altogether.

My family and I had spent the last 13 odd years living in London and so, complain though we may, we were accustomed to grey and gloomy skies and   incessant misty rain for the most part of a year.  English summers are unpredictable but when the sun shines and the skies are blue, life is glorious.  In contrast, the summer heat in Taipei was relentless with temperatures reaching as high as 38°C and a barely noticeable drop in the night.  The air conditioning was on 24 hours a day and our electricity bill was eye-wateringly high.

Being new to Taipei, we ate out quite often as we wanted to explore the many different and wonderful eateries that were on offer. However, trying out restaurants meant having to step outside and face the onslaught of heat and humidity. Sometimes it was just easier to eat a simple meal at home.

During mealtimes, I found myself searching for quick and easy options simply because I felt too hot and bothered to move.  My husband and I also found that our appetites decreased and we mostly craved ice cold drinks and light salads.  (I liked to think that this was nature’s cunning way of keeping us trim during beach season.) Often, I started off meals with cold soups like tomato-based gazpacho or cucumber, yoghurt and mint, which required no cooking but were packed with flavour and nutrition. For salads, I liked to combine Western classics with Eastern flavours; for example, a South American ceviche made with a Thai-inspired dressing.

As much as possible, I tried to create dishes using little, if any, “heat action.” In the case of a ceviche, this meant using fresh citrus juice (be it lime, lemon or grapefruit) to create a sharp dressing that was used to marinate thinly sliced or chopped raw fish.  The citrus juice played dual function – it not only added tartness to the dressing but also helped to “cook” the raw fish.  Given a bit of time, about 20 minutes or so, the fish slowly changed from translucent to opaque and acquired a firmer texture as if one had very slowly cooked it over heat.

This technique can also be applied to raw prawns, lobsters, scallops and squid but I do need to emphasise that for food safety, especially in the scorching summer, you should use very fresh sashimi-grade seafood to make ceviche.  I have also used the same method to slightly soften thinly sliced raw vegetables, such as carrots, courgettes, radishes and even beetroot, to create wonderfully cool and refreshing salads – all of which helps to make summer in Taipei a little more enjoyable. 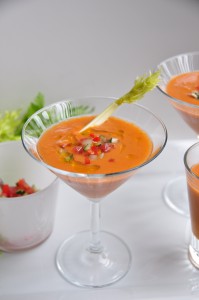 Cool watermelon adds a subtle sweetness to this wonderfully refreshing soup.  To add a bit of contrast and colour, you could top the soup with a little crumbled feta cheese and toasted melon or pumpkin seeds.

drizzle of honey (or caster sugar), to taste

First, select few chunks of watermelon to use as a garnish for the soup. Finely dice the watermelon and place into a small bowl.  Cut off a quarter each of the cucumber and red pepper, removing any seeds, then finely chop them to about the same size as the diced melon.  Mix all three ingredients together in the bowl, then cover the bowl with cling film and refrigerate until ready to serve.

Roughly chop the remaining cucumber and pepper and place them into a blender or food processor.  Add the rest of the ingredients and blend until smooth. Season well to taste with salt, pepper, Tabasco and honey, bearing in mind that you should err towards slightly overseasoning the soup as it will be served chilled and the flavours tend to be a little muted when cold.   Transfer the soup into a large bowl or jug, cover with cling film and chill for at least 20 minutes to allow time for the flavours to meld together.

Serve the gazpacho in wide bowls or clear glasses and spoon over a little chopped vegetable garnish.  Drizzle over a little olive oil and serve with celery sticks if you wish. This delightful starter is ideal for entertaining.  It is best to prepare the beetroot the night before you intend to serve the salad so that it has plenty of time to marinate.

1 spring onion, trimmed and finely sliced on the diagonal

First, prepare the marinated beetroot.  Peel and slice the beetroot using a mandolin so you get very thin rounds.  Place the slices into a bowl then add the rest of the ingredients.  Toss the beetroot to coat, then cover the bowl with cling film and chill for a few hours, preferably overnight.

For the ceviche, slice the salmon fillet into a 1cm dice and place into a bowl.  Add the chilli and spring onion. In another small bowl, stir together the sugar, fish sauce, lime juice and zest, and lime leaf until the sugar has dissolved.  Taste and adjust the seasoning to your liking, balancing the sweet, sour and salty flavours.

Pour the dressing over the salmon and toss to coat.  Cover the bowl with cling film and chill for 15-20 minutes.

To serve, drain the beetroot slices and arrange 5-6 slices on each plate.  Add the chopped avocado to the salmon and gently toss to coat in the marinade.  Spoon the mixture over the beetroot slices.  Sprinkle over a little chopped mint and sesame seeds before adding a tiny drizzle of sesame oil.  Serve immediately. Raw asparagus and cucumber would work equally well in this salad.  For a more substantial meal, omit the prawns and serve the salad alongside grilled steak or barbecued meats.

2 large or 4 small courgettes, preferably a mixture of green and yellow

First, stir together all the ingredients for the dressing in a small bowl and season well to taste.  Set aside.

Top and tail the courgettes and carrot then carefully slice them lengthways into long ribbons using a mandolin.  Place the vegetables into a large bowl and add the dressing, tossing well to coat.  Cover the bowl with cling film and refrigerate for about 15 minutes until the courgettes and carrots have softened slightly.
When ready to serve, toss the prawns with the salad then divide between individual serving plates.  Scatter over a few mint leaves and some crushed hazelnuts, if you wish, then sprinkle with a tiny pinch of salt and pepper.  Serve at once.