Ten Ten, Double Ten Day, Double Tenth Day, are all names referring to a public holiday held annually in Taiwan. The holiday’s official title is National Day of the Republic of China, and the nicknames have arisen because it is celebrated annually on October 10, which is the tenth day of the tenth month of the Gregorian calendar.

Until 1949 the holiday was also officially celebrated in Mainland China, and continues to be observed there, but is no longer a public holiday.

So what is this holiday all about?

October 10th is Taiwan National Day, but it is not Taiwan’s birthday.

Instead, it commemorates October 10, 1911, which was the start of an event called the Wuchang Uprising in China. This uprising led to the Xinhai Revolution which brought about the fall of the Qing (Ching) Dynasty, the end of the Chinese dynasties, and the founding of the Republic of China in 1912.

At this time, Taiwan had been under the rule of the Empire of Japan since 1895, and it was not until the end of World War Two in 1945 that Japan was forced to relinquish control of the island to the Republic of China.

October 10th is still observed on the Mainland by the People’s Republic of China as the Anniversary of the Xinhai Revolution, but in Taiwan, it has become National Day — a day where pride in Taiwanese identity is celebrated across the island.

How is Taiwan National Day Celebrated? 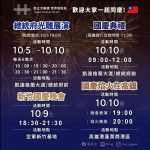 Traditionally, official celebrations begin with the raising of the flag of the Republic of China and singing of the National Anthem in front of the Presidential Office Building in Taipei. Military displays such as 21 gun salutes, parades of tanks and other military vehicles, and air show complete with paratroopers jumping from jets to land among the crowd, all have had a place over the years in 10/10 festivities. Foreign ambassadors and dignitaries from other countries are invited to attend these events and to hear the President address the nation.

In recent years many aspects of traditional Taiwanese and Chinese culture have become included in National Day celebrations. Lion Dances, martial arts, drum teams, and performances and displays by indigenous people are all part of the events occurring in front of the Presidential Office Building and in the major cities around the island.

Each year (with a few exceptions), a massive fireworks display is hosted in a different location around the country. These elaborate and lengthy displays are not to be missed and usually are accompanied by live music performed by Taiwanese artists.

What about this year? Celebrations on Sunday, October 10, 2021, will have to be flexible and will be adjusted in line with current Covid-19 protocols as issued by the Central Epidemic Command Center (CECC). Keep an eye on social media and newspapers for updates. The public holiday, where government offices, schools, and many businesses have the day off, is observed on Monday, October 11, 2021.

This year’s National Day celebration will not include foreign delegations, and the crowd size in front of the Presidential Office Building will be limited to 4,000, but it will feature the largest national flag ever flown by the Taiwanese military. The 18m wide by 12m long flag will hang from a Chinook helicopter as it flies over the Presidential Office.

Joining the Chinook will be a dozen different types of aircraft, including AT-3 trainer jets flown by the Thunder Tigers acrobatic team. The parade, if permitted to proceed, will feature military troops and a selection of missiles, along with first responders and other uniformed public servants.

Taiwan’s National Day fireworks will be held in Kaohsiung for the first time in 20 years. The local government has established multiple viewing locations for a total of 20,000 people. This number is much smaller than the usual crowd of over 500,000, and attendees must participate in an online lottery to secure prime vantage points, as well as cooperate with Covid-19 prevention measures. Taiwan’s athletes from the Tokyo Olympics will be in attendance as a thank you for their performance at the games. Read more on the official page for Kaohsiung.

The fireworks show itself promises to be spectacular with a record-high number of large firework shells displayed in locations across more than three kilometers. The Kaohsiung City Symphony Orchestra will perform original music with patriotic themes to accompany the pyrotechnic display.

Whatever you choose to do, and wherever on the island you choose to do it, take time to appreciate and celebrate the diverse cultural history and identity, burgeoning democracy, outstanding people, and all the other things that make Taiwan exceptional.