This year’s Annual Auction Fundraiser promises to bring a dash of glitz and Renaissance mystery to downtown Taipei.

In a tradition of costumed festivities featuring elaborate dances dating back to the fourteenth century French court, masquerade balls became popular during the Venetian Carnival season throughout the fifteenth and sixteenth centuries. The frivolity spread like sequined wildfire throughout Europe during the seventeenth and eighteenth centuries, though not without the odd masked assassination and calling into question the influence of foreign immorality, before being embraced by Colonial America. And finally, the masked merriment is set to be played out at the Grand Hyatt Taipei this October the 14th.

This begs the question, what does one wear to a masquerade ball? If you’re unable to pop off to Venice to pick up a mask, Yongle fabric market (永樂市場 – yǒnglè shìchǎng) offers a practical alternative. Whether you want to pick up a mask that’s ready to be worn or you prefer to create your own masterpiece, you will surely find all that you need to keep people guessing as to your identity at Yongle. 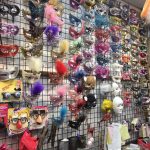 Please come in what you are most comfortable in. Typically attire ranges from cocktail to formal for women and from a shirt and tie to a tux for men. One of the great things about The Center’s Auction is that there is no pressure to dress black tie if you don’t like or you can if you would like to!